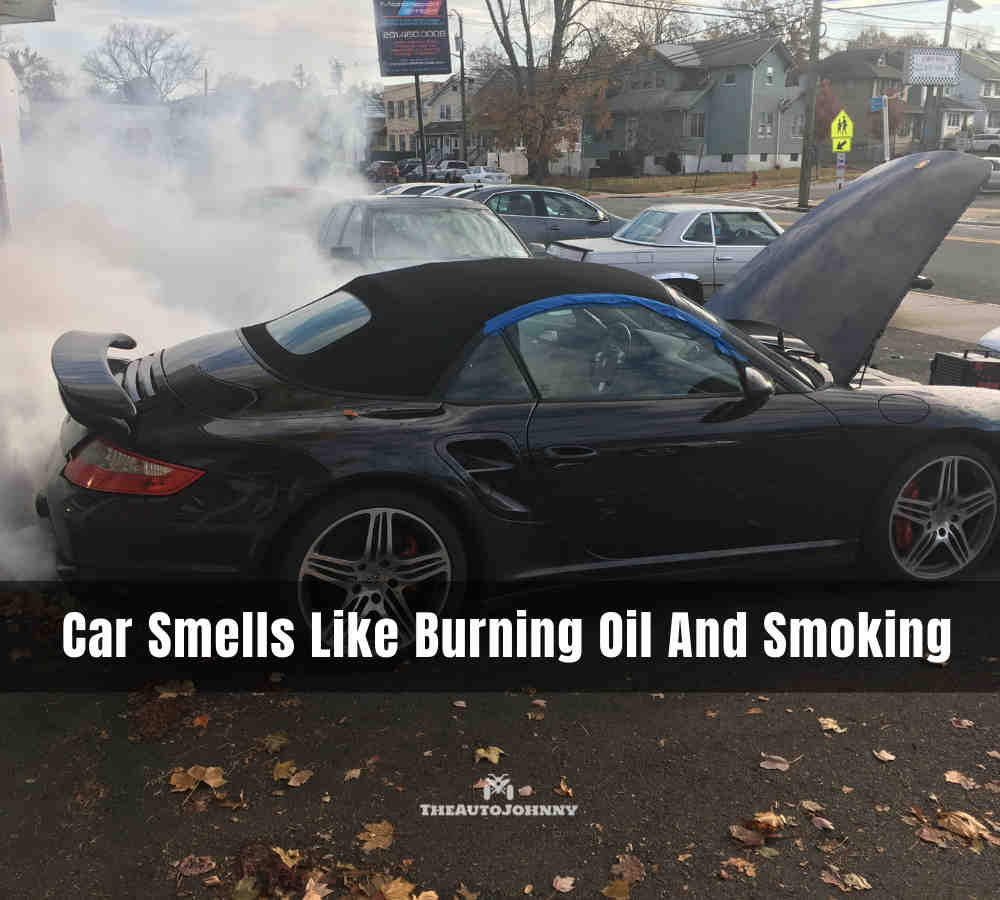 Your car smelling like burning oil and smoking can be terrifying. Especially if you and your family are inside the vehicle. You should always anticipate the worst-case situation. But without wasting time, you should start inspecting.

But why does your car smell like burning oil and smoking?

There are a number of reasons for the smell. First, it can be an oil leak. Even a bad or damaged gasket is also a reason. Then a problem in your exhaust system can cause both the smell and smoke. Plus you should understand the color of the smoke. Each color has a different reason.  It can be white, gray, or black.

We both know the above information is not adequate. We invite you to read the below-given info to know in-depth.

It’s time to go right into the provided details-

Reasons Why Does Your Car Smell Like Burning Oil?

Your car smell being similar to the smell of burning oil is never welcomed. Situations like this can be considered dangerous. But what are the reasons behind this smell?

Let’s see what we can find out-

Not sure why your car smells like burning oil after driving?

It’s because there is an oil spill or leak. An oil spill is hazardous for various reasons.

For starters, if it comes in contact with the exhaust, it might start a fire. An oil spill also causes low fuel in your car. A low oil level may also cause engine damage.

Wondering why burning oil smells but no leak?

The most typical source of smoke beneath your hood is the exhaust system. If this happens you won’t notice any oil leak. Just smoke and the smell of it will be present.

Oil seeping from your car’s timing belt or its crankshaft seal might also be a problem. It can occur if there is an oil leak caused by a bad gasket or seal.

Small amounts of motor oil or other fluids may be spilled unintentionally. Seeping onto a hot engine from a faulty gasket or seal.

Are you thinking why does your car smell like burning oil after an oil change?

Well, If you notice an odor soon after changing the oil. Then a faulty drain plug is a culprit.

Another possibility is that the filter was not properly installed or attached. Also, an oil cap that wasn’t fastened or tightly enough can be the reason.

Also, along with the smoke smell, you might see smoke coming out of your car. This happens pretty often. Hence, identifying the smoke color is important for the proper solution.

Identify the Color of the Smoke

A cloud of smoke erupting from the tailpipe or beneath the hood usually indicates something. It can be a major mechanical or electrical problem. Now, you have to know the problem before we move on to the solution-

The white smoke coming from your exhaust indicates coolant from a failed head gasket. It also means that another internal engine component is combusting in the combustion chamber.

A blown radiator hose splashing coolant over a hot engine produces this type of smoke. The smoke looks like wispy white smoke that seems to be steam.

Now if rubbed between your fingers. Then you will see smoking coolant has a pleasant aromatic flavor. And also you can feel oily.

If your car is emitting white smoke, have a professional inspect it thoroughly.

The presence of blue or gray smoke is a strong and bitter odor. It’s emitted by the tailpipe. It indicates that the engine is consuming oil.

Worn or seized piston rings, leaking valve seals, a clogged PCV valve, can be the causes. And also failing to change the oil on a regular basis. Lastly, overfilling the crankcase can be responsible too. The use of the incorrect type of oil is also a probable cause.

Blue smoke shows that the oil consumption is in the absence of exterior leaks. Also, it indicates the oil is steadily burning in the engine.

It happens because transmission fluid is pushed into the intake. That manifold by a faulty transmission vacuum modulator. Therefore, it causes thick grey smoke that emerges from the exhaust.

To avoid this problem, change to thicker or higher-mileage motor oil. This will help you avoid any future incidents.

A sensor in the engine has now failed, allowing unburned fuel to enter the exhaust system. Then it exits the tailpipe.

One of these situations will produce black smoke that smells like gasoline. Your vehicle will operate poorly until the issue is rectified.

Not only this you will also get low gas mileage. This will potentially destroy the catalytic converter and O2 sensor.

Flickering lights or interference with other electrical devices can also cause black smoke. It’s basically an electrical breakdown or charred wires from a short circuit. It has the odor of burnt plastic.

A car has hundreds of feet of cable and electrical gadgets. That’s nestled into every nook and cranny of a modern vehicle.

The smoke from an electrical breakdown can come from under the hood. It can also come from the passenger compartment.

Always seek professional help. To avoid it in the future, be sure to clean the air system on a regular basis.

What to Do If a Car Smells Like Burning Oil And Smoking?

Your car smells like burning oil when heat is on. Plus you are also seeing smoke.

In this case, pull over and assess. Take a look around and apply your common sense. Try to park the car far enough away from other vehicles.

Examine the gauges and warning lights to discover if the engine is overheated.

Check to see if the oil pressure is low or if the oil light is on. Then check the engine light. Perform a rapid visual examination.

When the engine has cooled, check the fluids. Fluids may be flowing or puddles may form under the hood or on the ground. Then you should call a tow truck.

If your engine is heating up rapidly, step away from your car. Call the fire service department and also a mechanic.

Question: Can I drive if my car smells like it’s burning?

Answer: Normally, burning occurs when two surfaces rub against each other. If you smell any engine odors, pull over immediately. The next thing is to look for help.

Question: What if your engine starts to burn oil?

Answer: Burning oil is a common issue. But if neglected, it can cause serious harm to your car’s engine. Common reasons for burning oil include worn valve stems, piston rings, guides, and seals. All of these can allow oil to flow into combustion chambers. This can cause a serious accident.

Question: How much oil burning is normal?

That’s all regarding the topic of car smells like burning oil and smoking. You should not underestimate any form of smoke coming from your vehicle. Always stop your car and call an expert in this situation.