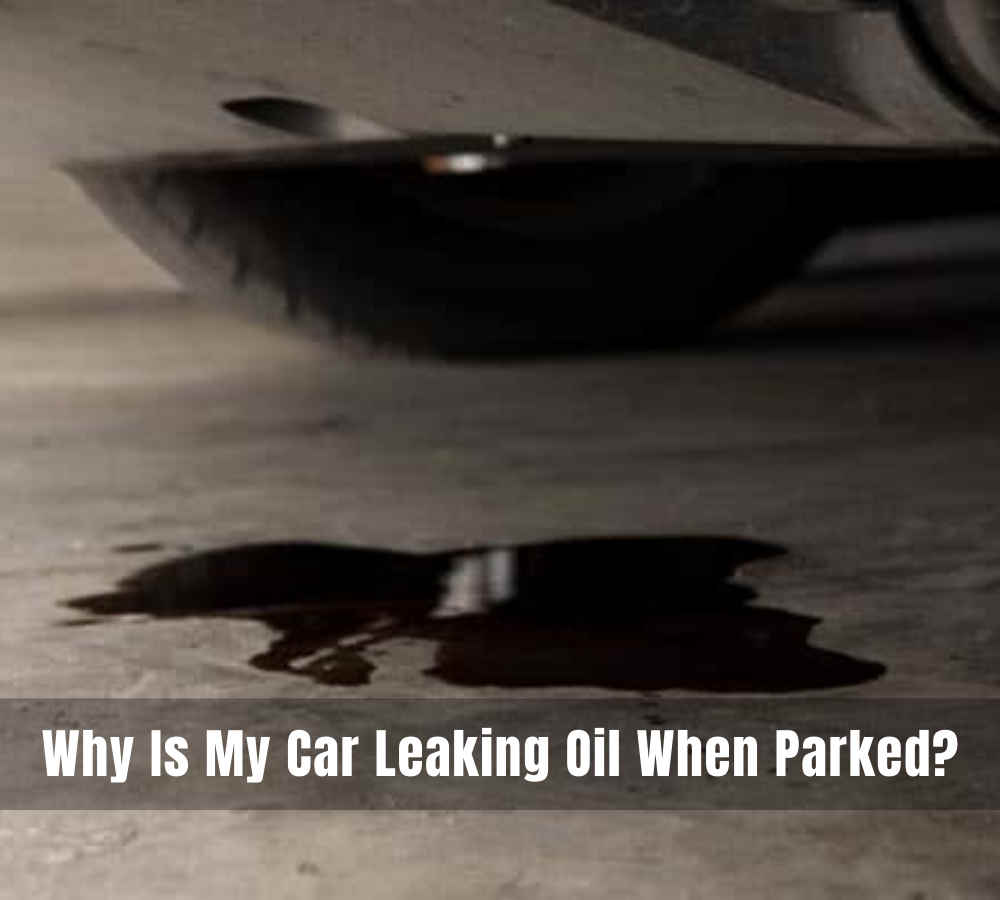 You may notice pools of oily looking substance collecting around your parked car. If this happens more than once, it’s possible the oil is coming from your car. An oil leak may potentially be your car catching fire.

So, why exactly is your car leaking oil when parked?

An oil leak is usually caused by damaged engine gaskets or oil seals. These components might deteriorate over time. But it may also be affected by a variety of other factors. For example, even damaging an oil filter can cause this issue. Then camshaft leaks are another cause.

Here, we’ll explain the causes of the oil leak in detail. We’ll tell you all you need to know about what to do as well.

So, let’s dive right into it.

How Do You Detect Car Leaking Oil When Idling?

After your car has been parked, you’ll find a puddle of greasy-looking brown liquid underneath it. This is one of the common indicators of an oil leak.

An oil-covered engine is also a strong indicator of a leak. Check your vehicle’s fluids every now and then by opening the hood.

Also, when oil leaks, it can come into touch with hot engine surfaces. This may cause the surface to burn and emit a noxious odor.

Always remember that many modern cars have shielding beneath them. This will collect the oil instead of seeping into the ground. As a result, a large-scale oil leak may be concealed. But a low oil level indicator may show signs of this kind of leakage.

Can I Drive with An Oil Leak?

The answer is no. Oil leaks may deplete your engine’s oil supply. These cause the most dangerous situations.

Don’t try to start your car if there’s a pool of oil on the ground. Because you may not have enough oil to lubricate your engine. This might result in irreversible damage. If you do so, your engine may need rebuilding or replacement.

Oil leaks can cause serious harm to your vehicle’s radiator. It may also harm the air conditioning system.

Accumulated oil can degrade the seals and rubber hoses of these components. It will make them wear out early.

In the most severe of cases, leaks of oil pose a fire and safety risk. You or others might get hurt. Because the oil from a leak may cause your car to catch fire later. Or the engine may seize and fail while you’re driving.

If the engines are seized, it may result in repairable damage at best. The damage may also be serious enough to replace your engine.

Why Car Oil Leaks When Car Is Off?

Your parked car might be leaking oil for a number of reasons. Here’s a detailed description of the main ones-

The engine block and head of your car get heated as you drive. As hot metal components expand, the seals and gaskets of the engine are strained. This is designed to stop oil from leaking.

But why is your car leaking oil after sitting?

Well, metals will contract as the engine cools (car is parked or off). This causes gaps within metal components and rubber seals. As a result, oil leakage will form.

In this case, it’s advisable to have your car repaired by a mechanic. They can tell if the problem is a faulty oil gasket or pan. The leak may also occur at the main seal, or a worn-out ring or valve seal with open gaps.

A dysfunctional oil filter can cause oil to seep into the engine. This may occur when oil is passing within the filter. Additionally, a broken oil pan might result in oil leaks below the car after driving.

An oil pan might be struck with enough power to cause damage. As a result, your vehicle may have a rapid leak. It might also result in a steady leak that worsens with time.

The leak might also occur if you don’t change your oil filter in time.

This is why it’s important to check your oil filter. Change them when required to prevent deterioration. Also, for a broken or damaged filter and pan, go to an expert to get help.

It’s possible that the threads on your oil pan plug are stripped. Or that it wasn’t correctly installed and tightened.

You can use a rubber stopper as a temporary fix. But you’ll eventually need a more long term solution.

It’s possible to replace the oil pan plug. You can use a hardened steel thread insert instead. For your specific car’s oil pan, use the correct size and thread pitch.

A damaged head gasket sealing your engine block can be responsible for a leak. This especially happens if you drive an old vehicle. The seal may have deteriorated with time. As a result, oil will seep from the engine block’s top.

An overheated engine can be caused by driving a car with insufficient coolant. The cylinder head may distort. Moreover, a head gasket may leak as a result of this.

Antifreeze is important to prevent the water in the system to freeze in a colder environment. If you can’t find enough antifreeze, it’ll cause an engine block to freeze.

In these two scenarios, your engine may need to be overhauled. For best results, take your car to a repair shop. If the engine is damaged beyond repair, look for replacements.

The camshaft seal is a piece of rubber that fits across the end of all camshafts. This keeps oil from leaking out of the engine.

This may not cause a large enough leak to pool on the ground. But it’ll cause oil to pool beneath the valve cover at the engine’s back.

A large camshaft leak causes smoke to billow from the engine compartment. You may even be able to smell smoke without seeing it.

A mechanic can examine your car. They can see if the oil leak is caused by a damaged or faulty camshaft seal. Then fix the leak according to that.

That’s all we had for you!

Question: Is It Costly to Repair an Oil Leak?

Answer: The cost of repairing an oil leak varies. It’s usually based on what the problem is that is causing the leak.

Question: Is it okay if my car leaks water?

Answer: Water leaking from your car is considered normal. It’s especially common on hot days. Because you’re using your A/C a lot.

Question: How can I stop an oil leak?

Answer: There are several DIY leak stopper products on the market. Nevertheless, it’s best to take your car to a shop. They can detect the problem better.

Now, we hope you understand the reasons for your car leaking oil when parked.

Hope this helps you determine which issue is causing the leak. Also, our advice is you take your vehicle to a mechanic when you see a leak. This will cost more money. But at least your car will be safe.

We hope you resolve the issue. Good luck!