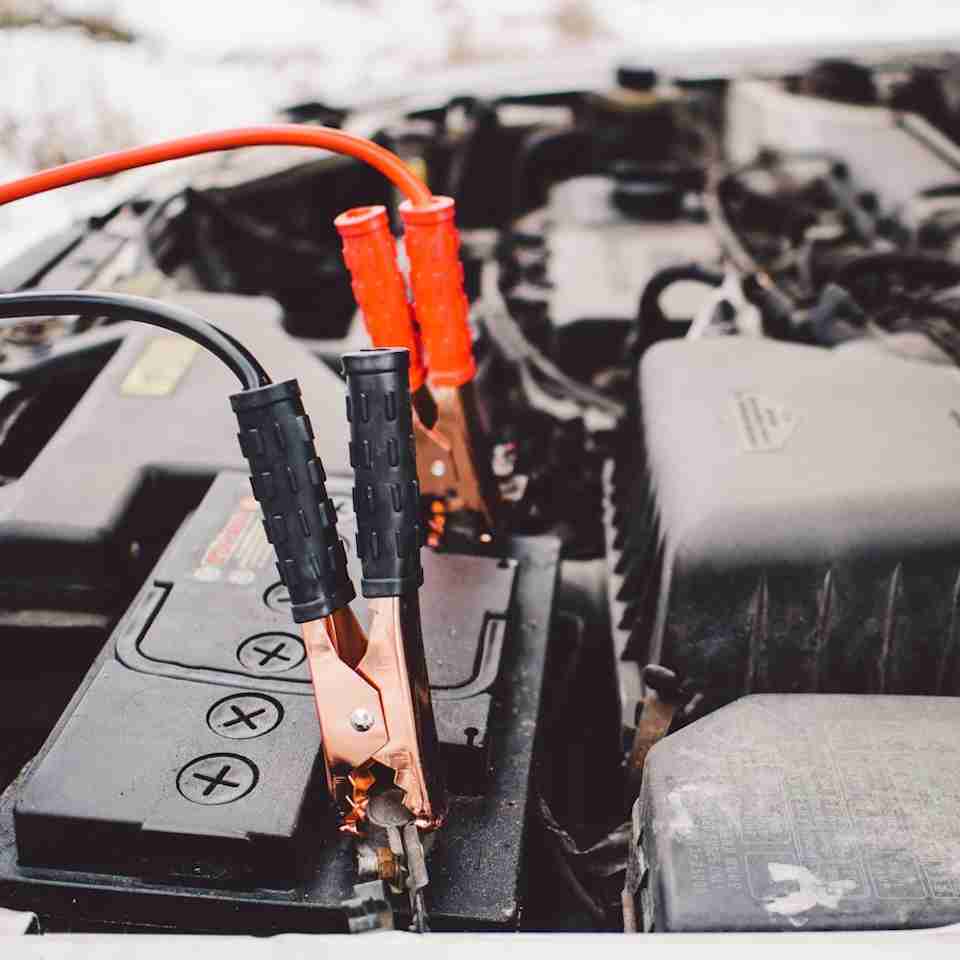 Everything has a lifetime. After that time, we cannot use that particular object. And batteries are no different than that.

So, changing batteries become mandatory after a certain period of time. But buying a battery costs a ton. Additionally, we have to incur that servicing cost.

As a result, many think of restoring a battery rather than buying a new one.

But no matter whatever method you choose, you’ll have to attach and disengage the battery.

So, it’s crucial to know how to reconnect a car battery properly.

But finding a complete guide about that is a bit tough. And if you know how to do that you might be able to save a few bucks. 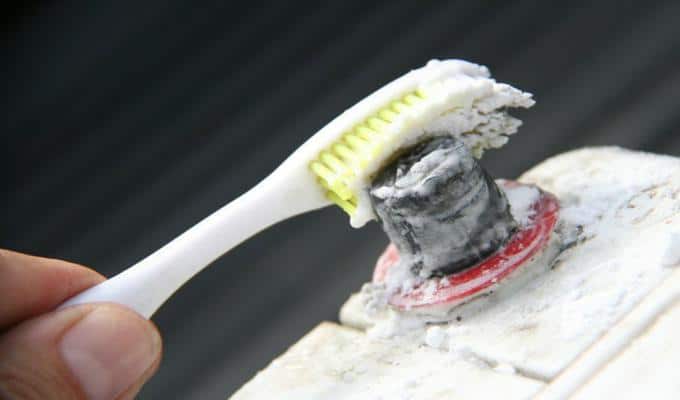 Here the goal is to clean up the battery, the holder. In the process, you’ll also check the terminals and wires. So, let’s begin-

Step 1: Get on full protection

Get goggles and latex gloves. You don’t know when accidents may occur. So, it’s better to be prepared.

Batteries tend to explode if something goes wrong. And when these little bombs explode, the acid inside spreads. If a drop of these chemicals can get into your eyes, then you might receive severe damage.

So, get a full-on prep before dealing with this battery.

Full protection also includes getting the car in a safe position before working with the battery. Also, don’t forget to pull out the key from the ignition before all that.

Step 2: Clean up the battery terminals

Here you’ll need baking soda and water. Make a mixture with 1 tbsp baking soda and 2 cups of water. Spray this solution on your battery terminals and start scrubbing. For the scrubbing, you can use a wire brush.

Do the same for the battery cable ends.

However, it’s okay if you don’t have baking soda and other kinds of stuff. You can use 100 grit sandpaper for this task.

This cleaning is pretty important. Because the terminals and cable-ends tend to build up debris and rust. That build-up leads to corrosion. So, by removing all that you can make your connections long-lasting.

It’s not surprising to have a damaged cable in the car. So, look for any sort of damage to the cables. Try to remove the threat.

After finishing up with the checking, start applying for corrosion protection.

If you ask how to reconnect a car battery safely, then we’re saying that this is the way. 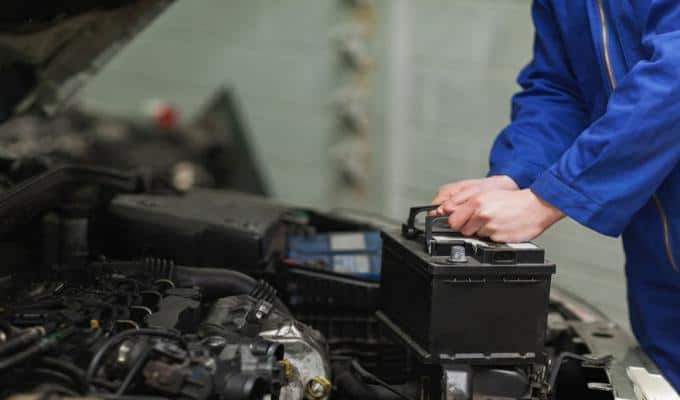 At this point, you will do the actual placing. But in order to secure the battery in place, you have to follow a couple of steps. So, let’s look at the steps-

You may laugh by reading the headline here. But it’s here for a reason.

We know that cars have the battery tray at the front inside the hood. But that’s not the same for all the cars.

Some modern cars keep the battery tray in the trunk. Some even place it in the cabin.  So, find your battery tray if you don’t know already.

Step 2: Set the battery into position

Here you have to do two things basically.

This is all part of the right way to reconnect the car battery.

The second task here is to lower that battery into the tray. For this, you’ll need to use both your hands. Once you’re done with the battery orientation, slowly start lowering it.

After putting it down, push a bit to see if it moves. If it moves too much too easily, then try to fix it.

However, be a bit cautious while putting it down. These batteries weigh around 2 pounds. So, there’s a high possibility that the battery might slip from hand.

After positioning the battery it’s time to hold it down. Because you don’t want your battery to roll over while the car is running.

Now, to secure the battery, you can use either metal hooks or straps. Some cars have inbuilt metal hooks. If your car doesn’t have any then collect a heat-resistant strap. Use that to hold down your battery into position. 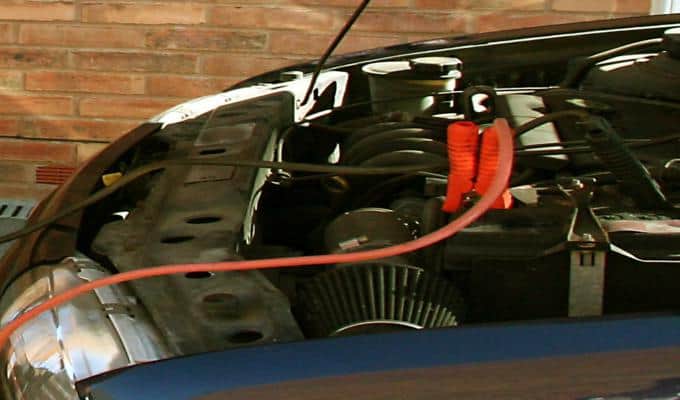 After cleaning and setting the battery, we’ve got only one task at hand. That is connecting battery terminals.

So, how to connect wires to a battery terminal?

Well, we’ll answer that question through a few steps. Now, let’s get going-

By now you must have known which cable is the positive one. Still, we’re clearing things out. The positive cable tends to come out of the alternator.

However, all of this will become a lot easier if you draw up a car battery connection diagram.

Here you’ll need a wrench. Now you might wonder why the wires need tightening. Those seem fine after the first touch. But there’s a catch-

That connection seems fine now. But when the car starts running, those cables my loosen up and get detached from the battery.

As a result, you might lose an electric connection in the middle of the road. Or worse you may face a short circuit.

So, it’s important to tighten up those cables. Now, how to do that?

You’ll find a bolt on the connector terminal. Use a wrench and turn that bolt counterclockwise. Soon you’ll reach the last point.

However, even at this point, your wire might be a bit loose. Wiggle the wire a bit to check this. If the cable moves, then try another round of tightening.

A lot of people complain that the car battery sparks when connecting negative.

However, we’ll get to that a bit later. But for now, let’s finish up the details of attaching the negative cable.

Press the negative cable onto the battery terminal. After that secure the cable in place with a wrench.

So, how to avoid sparks when connecting the battery?

If your reconnect car battery sparks, then just go through these solutions. We believe it won’t spark anymore.

Now, about the general cable installation-

It might happen that your cable isn’t reaching the terminals. This happens if there’s something wrong with the battery landing and orientation. The solution to this problem is to repeat part 2.

Once you’re done with all that, it’s time for a connection check. No, you won’t have to inspect wire by wire. Basically, all you need to do is to start the car.

But while doing that, you have to maintain some protective measures. For starters, while turning the ignition key, make sure that you’re in an open space. Keep fire extinguishers nearby. If anything goes south, then quickly get out of the car and get to safety.

Now, if your car roars up after turning the ignition key, then congratulations you have successfully installed a car battery.

Q: Should a car battery spark when connecting it?

Ans: You can expect mild sparks if your car clock or radio is on. If not, then no. And major sparks are not normal.

Q: What happens when you connect car battery wrong?

Q: Which terminal should be connected first?

Ans: The positive one. If you do the other way around, then the whole car frame gets grounded along with the nuts and bolts.

We’re at the end of this tutorial. We believe now you can teach others how to reconnect a car battery.

Now that you know the procedure, don’t run around with a faulty battery. A lot many car owners tend to do that. But that’s super risky. So, what are you waiting for?

Order up a new battery and open up that hood. Clean the battery and cables, install the new battery, and start your new adventures. However, always maintain safety measures while doing this. Because a wrong step might cost you a lot.